Being a mother during the pandemic has been tough – but not without its silver linings.

While the pandemic has been challenging for everyone, it has been particularly hard for mothers. Trying to get work done at the kitchen table, bedroom or couch, while also helping kids connect to their remote classroom, on top of all the other responsibilities every parent has, can be a lot.

In the spirit of Mother’s Day, and to celebrate the mothers at Commerce Bank and all over the world, we asked a few of our team members to share their personal experiences around balancing work and home life during COVID.

Each of them said that the early days of the pandemic, when working from home was brand-new for some and children were suddenly at home 24 hours a day, were particularly tough.

“It was mass chaos at first,” says Cristina Avalos, a Kansas City-based compliance advisor for Commerce and a single mother of two school-age girls. “When we went into quarantine, it was a big change for all of us. I had to help my kids while also dealing with my own remote calls and meetings, and it was a lot.” 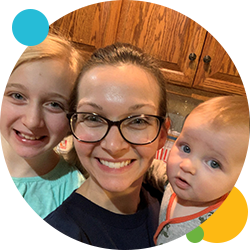 Molly Badami, an analyst in Commerce’s Financial Planning and Analysis group in Kansas City, had a similar experience. When the pandemic struck, she had a fourth-grader and a one-year-old at home, and was pregnant with her third child. “It was really hard, because we’d been getting help with the kids from grandparents, but that had to go on pause with all the unknowns around COVID,” she says. “My husband is a firefighter and works 24 hours at a time. When he had to work, my days felt like a jigsaw puzzle as I tried to balance my older daughter’s school schedule, my own meetings and making sure the kids were entertained while I tried to work.”

For Suzanne Robinson, the initial impact of the COVID lockdown was a bit different. A regional account manager in the bank’s Commercial Products Group who is based in Georgetown, Texas, Robinson has worked remotely her entire 11 years with Commerce.

“My work setup didn’t change, but I suddenly had three new coworkers at home with me,” she says. “My daughters were in kindergarten and seventh grade when their schools closed last year, and my husband is a college professor. Our biggest challenge at first was creating space for everyone to work and attend class. We had to juggle multiple schedules and balance everyone’s physical and emotional health.”

Robinson notes that, as a manager, she also had to be mindful of what her team members were going through at the same time. “Each person on my team was dealing with their own challenges and learning to balance their lives as well,” she says. “I really felt like I was trying to keep a lot of balls in the air all at once.” 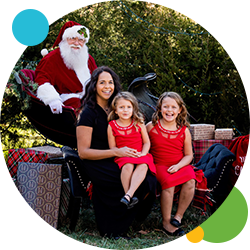 Avalos says that the entire experience of parenting during a pandemic has been a “learning curve,” but as time has gone by, she and her family have found their way through it. “We elected to send our younger daughter to school, because it’s the best-case scenario for her,” she says.

Avalos’ younger daughter, who is deaf, attends a school where she is learning to communicate using American Sign Language. “We can’t provide her all the support she needs at home, so having her go in person is ideal,” says Avalos. “I decided to home-school my other daughter, which helps us to coordinate schedules. She manages her own time really well, which helps a lot.”

Badami says things improved once her oldest child’s school reopened. “It was a struggle to decide whether to send her to class in person,” she says. “There were so many unknowns, including the fact that I was pregnant at the time. Fortunately, it worked out.”

It hasn’t always gone smoothly, Badami says. She admits that her kids’ screen time is higher these days than she would like. She also occasionally blurs the line between work and home. “Having access to work all the time sometimes makes it difficult for me to ‘turn off’ when I’m in the middle of something,” she says. “I’m trying to be better about that.”

Like Badami, Robinson says that having her children back in school has made a world of difference. “It allows me to have a regular routine at home,” she says. “I don’t know how much longer we could have gone with the kids being at home and my husband and me trying to work. Now we can see the light at the end of the tunnel.” 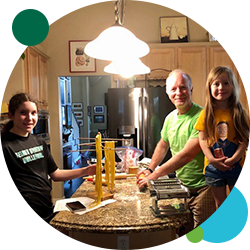 Fortunately, all three women report that they’ve seen some silver linings that have come from having everyone at home so frequently. Avalos says she’s more involved and invested in her children’s education than ever before. Badami appreciates the extra hour she gets in her day since she no longer has to commute to an office. Robinson has taken advantage of the extra time with her kids to cook with them and try new things, including making pasta from scratch.

When asked if they have any advice for other mothers during the pandemic, each said that it was important for all parents to take it easy on themselves right now. “It’s all about keeping a positive mindset and celebrating progress,” says Avalos. “Not every day will be a great day, but there’s always tomorrow. Don’t get down over one day that was crazy and chaotic.”

Badami stresses the importance of accepting what can’t be changed and focusing on what you can. “Give yourself credit for what you’re doing, because it’s not easy,” she adds. “Don’t stress the small stuff. I told my daughter the other day that I regret the times when we fight with each other. I want to laugh with her and share stories, not argue. But you can’t hold onto those regrets.”

Robinson says she recently read some advice that has helped her tremendously. “It said that if you had a friend in the same situation you’re going through, what would you tell them?” she says. “I’m harder on myself than I would be if I were advising a friend. I’d been thinking I was doing a terrible job of everything, but if one of my friends said that, I’d try to encourage her. We all have to understand that we’re doing the best we can. And the best we can is actually very good.”