St. Louis, MO – March 13, 2018 – Commerce Trust Company today announced that effective February 1st, John Handy, currently president and COO, has been promoted to president and CEO, replacing current CEO, Ray Stranghoener, who will remain as chairman. Handy will report to John Kemper, Chief Operating Officer of Commerce Bancshares. Stranghoener, who has led Commerce Trust since 1999, will continue to work with major client relationships and will also serve as a strategic advisor to Handy in his new role.

“John was one of my first hires when I came to Commerce, and he has become recognized as one of the leading wealth management executives in our industry,” said Stranghoener. “He clearly was the right choice as my successor.”

“Under Ray’s and John’s leadership, Commerce Trust has grown to become one of the top wealth management firms in the country, and it is one of the fastest growing businesses at Commerce Bank,” said David Kemper, chairman and CEO of Commerce Bancshares. “Ray and John have worked together for more than 17 years, and they have built the premier wealth management team in our region. Proof of this team’s success is demonstrated by the Trust Company’s compounded annual revenue growth of nearly 10 percent over the course of Ray’s tenure as CEO - a truly remarkable track record - and their achievement of one of the highest client retention records in the industry.”

Prior to joining Commerce Bank, Handy was chief operating officer and director of TIAA-CREF Trust Company, FSB, the Missouri-based trust subsidiary of the national teachers’ retirement fund manager. Handy received his bachelor of arts degree in economics and business administration from Wittenberg University in 1985. He is a graduate with honors from the ABA Graduate Trust School of Northwest University, where he earned his CFSC designation. Handy also holds a Series 65 license.

Commerce Trust Company, founded in 1906, is a specialized division of Commerce Bank, solely focused on wealth management, investments and planning services for families and institutional clients. With clients in all 50 states and 26 countries, Commerce Trust oversees $47.1 billion in assets under administration, $28.6 billion in assets under management (AUM) and is ranked 21st nationally based on AUM. In 2017, the St. Louis Business Journal ranked Commerce Trust Company St. Louis’ largest local trust company. 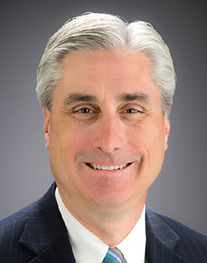 John is the president and chief executive officer for Commerce Trust Company. Prior to joining Commerce Bank in December 1999, John was the chief operating officer and a director of TIAA-CREF Trust Company, FSB, the Missouri-based trust subsidiary of the national teachers’ retirement fund manager. Prior to joining TIAACREF, he was with Bank of America (formerly Boatmen’s Trust Company) for 10 years, where his responsibilities included managing a group of 14 regional trust offices in seven states. John received his bachelor of arts degree in economics and business administration from Wittenberg University in 1985. In 1991, he graduated with honors from the ABA Graduate Trust School of Northwestern University, where he earned his CFSC designation. John also holds a Series 65 license.