If you’re familiar with Agile, you may know it’s often associated with software development and technology companies. But Agile is a process that can be applied to all types of businesses – and to a variety of business problems. It is primarily known as an innovation tool, but Agile can help organizations improve customer satisfaction, increase collaboration and get to market more quickly. It is a mindset and set of principles and tools we’ve adopted at Commerce company-wide; teams have set up Agile in the way that works best for them and their work. Here are four ways Agile helps us work more collaboratively, efficiently, intelligently and flexibly.

As Michael Scott of The Office once said, “People will never go out of business.” As an increasing percentage of our daily communication happens through technology, it’s easy to forget there is a human behind every email, system notification and text message. E-communication is quick and efficient, but we lose the benefits of face-to-face communication, like nonverbal cues and tone of voice. The first Agile principle we’ve adopted at Commerce is collaboration through regular communication. At 21 of our branches, teams make sure to get 15 minutes of face-to-face interaction every day. These are called “daily standups,” which is an Agile concept. Each person shares their priorities for the day, what is impeding their progress and any questions they have.

Even remote teams, like the treasury sales and implementation groups based in Illinois and Missouri, manage to hold a daily standup over the phone. They similarly take turns sharing daily priorities and impediments, and if someone is out the others on the team can jump in and help. They also use the time to share successes and best practices as a group.

“It’s helped us become closer as a team,” said Ada Buckman, vice president and treasury services sales officer for central Missouri. “It has allowed us to help each other, stay on task and stay accountable.”

They’ve applied this collaborative approach to almost all areas of their work. Cross-functional teams come together for client relationship reviews, product implementation projects and more. Because everyone knows what’s going on, and can lend their unique expertise, projects move smoothly and more efficiently.

As a result, they’ve seen increased profitability, deeper cross-sales and stronger client relationships. In 2017, the team increased revenue by $400,000 – more than double the average increase of the next highest top performing teams. “We attribute about 50% of the success directly to Agile,” said Sarah Dubbert, executive vice president for Commerce’s central and eastern Missouri region. “The daily standups keep the team in sync, focused and able to quickly work through impediments.”

2. Stop trying to do everything at once.

It’s been proven that multitasking is a myth. You can’t pay attention to two tasks at the same time, your brain can only quickly shift its attention from one to the other. With each shift, you spend mental energy refocusing on the different task. Switching between tasks may make you feel like you’re getting more done, but it ultimately degrades your productivity. Multitasking slows down individuals, teams and companies.

“To do two things at once is to do neither.” – Publius Syrus

When you’re running an online banking website, you can’t afford to be slowed down. The second Agile principle we’ve adopted – to help combat multitasking – is prioritization based on what will add the most value. The team behind Commerce Connections, our online banking portal for business clients, employed several Agile tools as they were about to launch an updated version of the site.

They filed into a conference room, armed with post-it notes and flip charts, to visualize how the site might be improved, in what is called a visioning session. They started by empathizing with the customer, drawing characters to represent the different types of users of the site and filling out “user stories” to think through their needs.

Then they considered business goals and requirements for keeping the system up to date, quickly covering the walls with ideas scribbled on post-it notes. With the prompt, “How might we…,” they brainstormed innovative solutions for meeting the customers’ needs and their own goals and captured what would need to be done. Finally, they determined the size and value of each task using the Agile concept of relative sizing and business value scoring techniques to help prioritize.

Then then tackled the highest priority items in two-week working windows called “sprints,” starting with high-value items that would require the least amount of time. As they knocked these out, they moved on to the next items in the following sprint. To keep track of the current and upcoming tasks as a group, they used a Kanban board to visualize their tasks and the status of each.

A Kanban board can be as simple as sticking post-it notes on a white board, and some teams use the website Trello for an online version. The key is to create columns for the stages of work: to-do, in progress, stuck and done, and then collaboratively move work across the board as rapidly as possible.

Working through the tasks like this, the team could break a huge project down into more manageable tasks – and keep them organized. By choosing to tackle a few at once, they could focus on getting them done before moving on to the next, increasing efficiency and productivity. As a result, “what used to take six months to a year now takes a few months,” said Dirk Vandervoort, a project manager on the team. “And we’re able to figure out right away if we’re going in the right direction and correct or improve our course.”

3. Build toward what your customer wants – not your educated guess.

It’s time to develop a new product, and you’ve gathered the bright minds of your organization, ironed out the strategy, and gathered plenty of research to back up the plan. But then when you launch the product two years later, customers don’t like it. Maybe it hasn’t kept up with changing trends or it’s missing a key feature you didn’t think of. Either way, and no matter how many resources you poured into it, your customer won’t buy it.

We’ve found that, especially when it comes to product development, it helps to incorporate customer feedback along the way, and that brings us to the third Agile principle. This concept has been especially vital for our work with healthcare clients, who are highly specialized and regulated and have unique needs as a result. 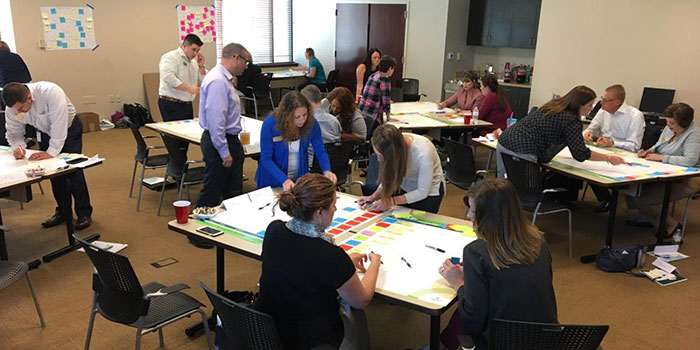 We’re bankers, not doctors, so when a team took on the challenge of helping hospitals collect patient payments, they created a prototype to share with a major healthcare client early on. The client’s regular feedback allowed them to continually tweak the product. The product that emerged, Health Services Financing (HSF™), has since been adopted by over 200 hospitals and gives patients a zero-interest line of credit with which to pay their medical bills.

“The industry is ever-changing, and the Agile process has allowed for open dialogue between the customer and our development teams so they can perform on-the spot what-if due diligence,” said Mark Huebner, director of HSF™. “Our large hospital clients have been impressed by our ability to listen and quickly make changes.”

Our final Agile principle is iteration: Try something out, get feedback and pivot if necessary. A team at Commerce took this approach and ultimately launched a product that has changed how the insurance industry issues payments to claimants. Called Claims Payment, the online portal gives claimants the ability to log in and choose how they would like to receive their funds: deposited directly to their debit account, in the form of a check or through ACH transfer.

Like the HSF™ team, they sought feedback from their insurance industry clients early on. They would develop a prototype, present it to the group of clients to get feedback and then add updates if needed. In fact, at first direct-to-debit wasn’t an included payment option. Shortly before launching, they received feedback from a major client who realized how important it would be for claimants who experience a crisis.

Think about it: If someone is filing a claim because they’ve lost their house in an emergency, they wouldn’t be able to receive a check in the mail. And they may not be able to wait for an ACH transfer, even if it only takes a few days. The team quickly pivoted. Thanks to recently released direct to debit payment technology, they created a new version that could send funds directly to the claimant’s debit card – in less than 30 minutes.

“If we didn’t have that feedback, we would’ve gone with the wrong option,” said Mike Long, the Claims Payments product manager. “It would’ve required redevelopment down the road to meet their needs.”

In February of this year, the team pulled off another key update based on client feedback. They learned that, with the direct-to-debit option, if a claimant’s bank declined the transaction for some reason, they weren’t being notified and would instead receive a mailed check. It would be better if their payment was confirmed or denied in real-time, and if it wasn’t successful they’d be directed to select a different option. Thinking it would take months to make the update, the team set to work and ultimately completed it in only three weeks (thanks to Agile prioritization and sprint planning).

Each principle is important and useful on its own, but they have the most impact when applied together. Some teams at Commerce have committed to using all four; some teams utilize one with the intent to adopt the others over time. The key is to do what works best for you, your team and your organization. If you’re interested in bringing Agile to your organization, you can get a look into our journey in “Four lessons we’ve learned since launching Agile four years ago.”