Orthodox church continues to build community, thanks to PPP funding.

For me, the PPP process seemed overwhelming at first, but Commerce showed us that they were looking out for the good of our parish. Their service is excellent and especially helpful to a church of our size. 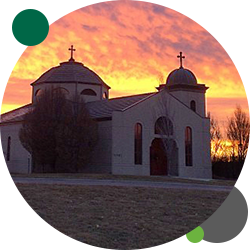 Most current parishioners of Holy Trinity Orthodox Church come from a far different world than the one inhabited by the Russian immigrants who founded their church in 1917.

“In the early years, many were escaping religious persecution, poverty and communism when they came to Kansas City’s Russian Hill neighborhood,” recalls Father Timothy Sawchak, who has served as the parish priest since 2005. “They underwent great sacrifice to form and grow our church.”

Since moving to its present home in Overland Park, Kansas, the once-Russian-speaking congregation has evolved to 160 adult members who are primarily American-born, English-speaking converts. “There aren’t a lot of Orthodox churches in our area,” Father Tim explains. “So we cast a net beyond our immediate neighborhood for members, while still making a strong effort to be part of our local community.”

In the past five years, for example, Holy Trinity has hosted local homeowner association meetings. It chartered a Cub Scout troop and has served as a polling place. Neighbors can rent a raised bed in the community garden the church built.

“Efforts like these connect us to each other and to the community,” says Father Tim. “If we grow church membership in the process, all the better.”

Then in March 2020, the novel coronavirus pandemic threatened their progress. “We immediately faced tough questions,” recalls Father Tim. “We had to figure out how to hold services safely while under a stay-at-home order.”

“We also worried about our finances, knowing that some parishioners would likely be losing their jobs,” adds Grant Sarris, the parish treasurer. “We don’t have three years of cash reserves available to cover salaries and other expenses.”

In Holy Trinity’s critical hour of need, Father Tim said a prayer. Then he called Commerce Bank to inquire about the newly announced Paycheck Protection Program (PPP) sponsored by the Small Business Administration. Commerce had served as the church’s bank since helping Holy Trinity refinance the mortgage on its new church several years earlier.

“My first effort at completing the PPP application was pretty comical,” admits Father Tim. “A small operation like ours relies on lay people like Grant for this expertise. When Commerce stepped in, the whole process became even easier.”

Holy Trinity’s application was submitted during the first round of PPP funding and approved shortly thereafter. The funds covered salaries for the church’s three employees for about two months.

Meanwhile — and with his wife and two children’s help — Father Tim began live-streaming church services from his home each Sunday.

When stay-at-home orders were later lifted, Holy Trinity gradually allowed people to return to church in person — first five, then 10, 30, and now 60 at a time in two Sunday services. Those who cannot attend in person can still participate by watching the services online.

“We’ve done a pretty good job of bringing church services to our parishioners,” says Father Tim. The tougher part, he admits, is the social part of parish life. “When our liturgy is over, we normally have a social hour with food that gives parishioners a chance to connect in person. Everyone misses that.”

The pandemic has had a few upsides, he says. For example, adult education classes offered via Zoom have been well-received by parishioners outside of the immediate neighborhood who sometimes found them difficult to attend in person.

Financially, the church is holding its own. Grant says the PPP funding Holy Trinity received helped bridge the financial gap during the period when donations were hardest hit.

“I speak with clergy throughout the country, and many had difficulty getting PPP funds,” Father Tim says. “Some were afraid to apply. There was fear of the unknown. Thanks to our great relationship with Commerce, we had nothing to fear.”

Besides, Father Tim adds, fear is not built into their parish’s DNA. “I think of all the sacrifice, love and grief over the past 100 years that got Holy Trinity where it is today,” he says. “Our job now is to be good stewards and make sure that this treasure — our church — survives and flourishes for future generations.”