BoysGrow is planting seeds of hope.

Inspiring boys to dream about their future is important to BoysGrow, a Kansas City nonprofit that introduces young teens from disadvantaged backgrounds to everything from farming and construction to public speaking and graphic design.

Learning how to take responsibility and practice teamwork also matter to the nonprofit, which welcomes a class of 15 to 20 new boys to its two-year program each year. 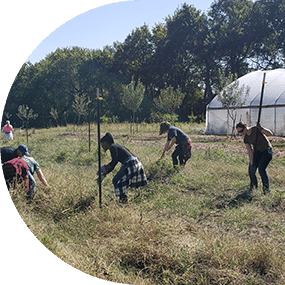 Over that period, the boys divide into teams according to their interests and spend their summers working three days a week for pay at the organization’s 10-acre farm, according to BoysGrow founder John Gordon. Culinary arts and landscaping are just two of the possibilities. When school starts, they remain engaged with training two- to three-days a month in business, marketing and “softer” life skills.

By the time each a participate graduates from BoysGrow, he will also have grown and harvested crops and helped bring a new food product to market.

“Over those two years, other things happen,” Gordon explains. “The boys gain self-confidence with every new achievement, which helps keep them on a good path.” The boys graduate with both pride in their accomplishments and money in their pocket.

Gordon says he was inspired to found BoysGrow after working in the California juvenile court system. There, he witnessed the changes one boy underwent after going to live on a small farm, where he learned to tend a garden and care for a goat.

“He was not only learning new skills, but also how to be part of something bigger,” he explained.

BoysGrow began as an arm of Big Brothers Big Sisters Kansas City in 2010, where Gordon served as a volunteer after returning to the Midwest. By 2011, BoysGrow had been awarded its own 501(c)3 status and relocated from a small two-acre lot in the city to the 10-acre site south of Kansas City that it now calls home.

In addition to farmland, the site houses a new commercial greenhouse where fruits and vegetables can be grown year-round, along with a dual-purpose farm kitchen that serves both as a BoysGrow workspace and a venue for corporate retreats, training programs and other special events.

“We designed the farm kitchen with both our needs and those of the community in mind,” explains Gordon. “We especially want our donors and prospective donors to be able to visit the farm, see the boys’ accomplishments and host their own gatherings here.” 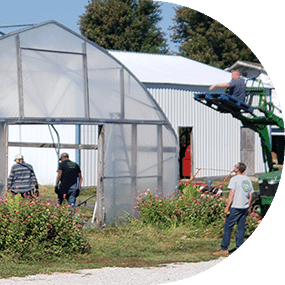 After one such visit, Commerce Bank awarded BoysGrow a grant that was used to purchase a truck. Commerce, which serves as the non-profit’s bank, is also one of many Kansas City companies that volunteer at the farm.

“Not long ago, Commerce had nearly 50 people out here for a day,” says Gordon. “Some helped with the construction of our new greenhouse, while others did a deep-clean on the farm kitchen and helped harvest peppers and raspberries.”

Other community partners help support the sale of the six products BoysGrow has developed. The nonprofit’s ketchup, sauces and other products can be found on the shelves at local Kansas City-area retailers. The proceeds account for as much as one-third of the nonprofit’s funding each year.

“Our ultimate goal is to get the boys thinking about their future,” he adds. “If their interest is sparked, that’s a win, whether it leads them to a career in entrepreneurship, agriculture, construction or something else.”

While the program is still young, some BoysGrow graduates have gone on to study graphic design and broadcasting in college. Several now serve as mentors to current participants, including one who works full-time as a staff leader. Virtually all leave the program with marketable skills, a strong work ethic and belief in themselves.

As Gordon looks ahead, he sees an exciting future for BoysGrow. “We like how we’re helping young people,” he says. “At the core, we won’t change. But there are opportunities for the organization to grow outside our four walls.”

If you or your organization would like to host an event at BoysGrow’s farm kitchen or get involved as a volunteer, John Gordon would love to talk to you. He can be reached at jgordonkc@gmail.com.