Where leadership starts: How 6th grade camp shaped this CEO.

Bob Holmes was an eager, albeit slightly nervous 11-year-old when he first rappelled down a cliff at Sherwood Forest Camp in 1975.

Like thousands of sixth-graders from the Clayton School District before and after him, Bob had come to Sherwood Forest as part of his transition from his comfortable and familiar elementary school surroundings, to the growing independence and expanding opportunities he would discover in middle school.

As far as Bob and his classmates knew, the residential camp existed only for them. Its cabins, dining hall and winding trails were a place to meet new people, try new things and explore, perhaps for the first time, exactly who they wanted to be and what larger purpose there might be for their life. Eleven-year-old Bob may have thought he was simply rappelling down a cliff, but the experience also was foundational in learning how to bring out the best in himself and others – traits that followed Bob Holmes into the leadership roles he would hold in the community and in his current role as CEO of Commerce Bank in St. Louis.

“I still remember being challenged to do things there I wouldn’t otherwise do,” Bob recalled recently. “Sherwood Forest gets in your blood. Once you’ve been there, you never really leave.”

Sherwood Forest is much more than a camp that prepares sixth-graders for middle school. Its core purpose is to provide children from low-income St. Louis families the opportunity to discover the world beyond their present circumstances, and how they might explore it and lead others to follow them. These children – many of whom had never left the city before coming to camp – have been making Sherwood Forest their summer home-away-from home since 1937.

Today, low-income families pay no more than $75 of the roughly $2,000 cost for a child to spend 26 days at camp. Donations, United Way funds and off-season rental fees from school districts offset the full cost of camp. 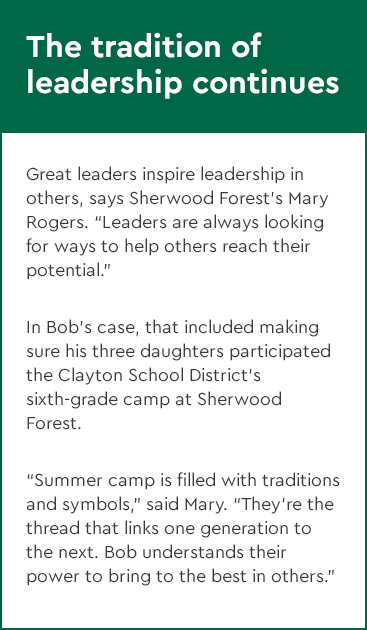 The Circle of Life

Today Bob is keenly aware of Sherwood Forest’s mission. With the exception of a two-year period when he lived in Chicago, he has been a member of its board of directors since 2003. He served as board president three of those years, before volunteering to shift roles and become co-chair of a major capital campaign to fund much-needed renovations to and expansion of the camp, which moved to its current location in Lesterville, Mo., in 1978.

Sherwood Forest may not be a traditional summer residential camp, but Bob is also not a typical board member, according to Mary Rogers, a former camper herself who graduated Sherwood Forest’s Leadership Program in 1970 and then worked her way through virtually every position there before being named executive director in 2002.

“After Bob returned to St. Louis from Chicago, he did something few people do,” said Mary. “He approached us and asked if he could return to the board.” “We were thrilled to have him back,” she added. “Bob is an understated, quiet leader. He is deeply committed to Sherwood Forest, even if he is not shouting it.”

His greatest contribution to the board, according to Mary, has been his even keel. “He is not the kind of leader that pounds his fist,” she observed.

“I remember when we were first thinking about the capital campaign in 2015,” she continued. “At first, we thought we needed to raise $3.5 million. Then it went to $4.3 million. Finally, at an executive committee meeting, Bob – our board president at the time – got quite definitive. For perhaps the first and only time, he put his fist on the table and said, ‘We need a number.’”

“That was a pivotal moment for us, and it was exactly what we needed to hear,” she continued. “Our campaign wouldn’t have moved forward without it.”

The board did its homework and came up with a number: $6.2 million. And then Bob went to work.

“Bob didn’t become a campaign co-chair for his pride or his resume,” said Mary. “He did it because he started the capital campaign, and he wanted a hand in finishing it. He put his heart and soul into ensuring its success.”

And succeed it did. With the help of Bob’s commitment and determination, the campaign propelled past its goal, raising more than $7.2 million. More importantly, Sherwood Forest recently celebrated the ribbon cutting and celebrate the grand opening of the fruits of this fundraising effort: a new 300-camper dining hall, new cabins and a new education center – complete with a reading room, library and STEM lab.

Yes, you read that correctly. Sherwood Forest is “Way More than Camp.” Sherwood Forest has a new reading room, library and STEM lab that provide built-in experiences that allow campers from underserved communities to progress and excel.

“Sherwood Forest doesn’t just provide swimming, canoeing and other traditional outdoor experiences,” said Bob. “It offers opportunities for leadership and a path out of poverty.”

Reading, for example, is central to the camp curriculum with the goal of combatting summer learning loss. This summer, third-grade boys at camp will read Hatchet, a Newbery Honor-winning novel about a 13-year-old boy who must survive alone in the wilderness. “Campers read together a chapter about him building a fire, and then they go out and build a fire,” explained Bob. “This is one of the ways we get them engaged in reading.”

And if they need more encouragement? “Besides the health lodge, the library is the only air-conditioned place at camp,” he said.

After summer is over, campers receive educational opportunities and support year-round. Older campers in Sherwood Forrest’s Leadership Program raise money for a trip to visit colleges. “The goal is for them to start thinking about the next level of education and what they need to do to get there,” Bob explained.

It’s a strategy that works. Campers who graduate from Sherwood Forest Camp’s Leadership Program have a 100% high school graduate rate. That compares to an overall 79.3 percent 2018 graduation rate for St. Louis Public Schools. Many go on to attend college, trade schools or join the military.

The camp’s focus on youth, education and community-building are all reasons why it has had a long and deep relationship not only with Bob, but also with Commerce Bank.

“Our bank’s core pillars include helping youth succeed and helping our community thrive,” Bob said. “Education is the pillar that links those two together. Sherwood Forest, like Commerce, takes the long view, with a mindset of service to others.”

“They’re trying to help others achieve their potential against the challenges of the environment they come from. It’s an uphill climb, and they are succeeding,” he said.

“Our bank’s support for Sherwood Forest is not for a pat on the back,” added Bob. “It’s to help youth focus on what matters most and how reaching their full potential can lead to a better society and more successful community.”

Bob’s continued support of Sherwood Forest is easily explained by his desire to create opportunities for more young people to succeed. But Mary believes, deep down, Bob’s own fond memories of camp in his formative years played a role in how and why “this” CEO has made an impact.

Bob Holmes is executive vice president of Commerce Bancshares and chairman and CEO of Commerce Bank of St. Louis. In addition to his work with Sherwood Forest Camp, Bob serves as a director and member of the executive committee of the St. Louis Regional Chamber, the United Way of Greater St. Louis and Tower Grove Park. He also serves on the investment committee of SixThirty, a global FinTech Venture Fund and Business Development Program. Following sixth-grade camp, Bob completed his secondary education in Clayton, before completing a bachelor of science degree in business administration at the University of Missouri in Columbia and a master of business administration from St. Louis University.