If you’re fortunate enough to meet Jureau Bowman, it doesn’t take long to recognize that she’s an ideal fit for her new role as Commerce Bank’s community outreach and banking officer. In this role, Bowman helps the bank connect with people and community organizations in underserved communities, where residents may struggle with financial issues and don’t utilize banking services. She helps people by showing how Commerce can help them become more financially stable, start building credit and establish a healthy financial future.

Bowman’s warmth, personable style and passion are immediately apparent, and it’s clear that these qualities will serve her well in her new position. “This job resonates with me personally and professionally,” she says.

“I’ve been in the same financial position as many of the people I work with in the community, and I want to help them find their pathway out of that.”

Bowman says that earlier in her professional career, she often would struggle to pay bills despite holding two jobs — at a casino and a bank — while also attending college to become a paralegal. After earning her degree, Bowman sought work as a paralegal but struggled to get connected with most local law firms, eventually finding a position at a firm in Kansas that handled collections.

“That was difficult for me,” Bowman says. “I was barely paying my own bills, so I was sympathetic when talking to people. I’d tell them, ‘Even if you can only send a dollar, let’s start there and get you going.’ The work weighed heavily on my heart.” It weighed so heavily, in fact, that she soon returned to working at the casino and again sought out a banking job — and that’s when she began her career at Commerce.

It was during this period that Bowman decided to work on getting her own finances in order. She began by putting $300 into a savings account, and she built from there. She was also named a lead teller at Commerce’s branch on Troost Avenue, in an area of Kansas City that is underserved in many ways.

“That’s when I noticed a lot of customers were like I had been,” she says. “They cashed their paychecks and took it all with them, never putting anything into a checking or savings account. I’d start talking to them and would try to help them.”

Bowman continued having these kinds of conversations with customers when she later became a financial services representative, and eventually the branch manager at Commerce’s Troost location.

“I’d talk to people about building credit and saving money, and I loved it.”

“I’d hold seminars at my church about financial literacy. It became a song I was singing all the time.”

At this time, Bowman also began getting more formally involved in community organizations. She joined the board of the Urban Financial Services Coalition (UFSC) of Greater Kansas City, whose mission is to enhance the representation of minorities in the financial services industry and promote access to financial services for lower-income communities.

She also joined the boards of the Southtown Council, which works to create economic development and growth in the Southtown area of Kansas City, and the Troost Avenue Community Improvement District (CID), which aims to keep the neighborhood around Troost Avenue safe, clean and thriving.

“Both Southtown and the Troost Avenue CID had a goal of helping small businesses and individuals with their finances,” Bowman notes. “I started getting out in the community and meeting small business owners. Many said nobody had ever come talk to them before. Suddenly we were doing a lot of work with small businesses at the Commerce branch on Troost.”

Bowman was so invested in the work she was doing in the community that when Commerce offered her a position at a different branch, she turned it down, even though she thought the move would be good for her career. “I wanted to keep building what we were building,” she says. “People in that neighborhood needed me to stay.” While Bowman was committed to providing needed advice to her customers around the Troost branch, she was aware that the needs of the underserved were not unique to this neighborhood. When the community outreach opportunity became available, she jumped at the chance to take what she’d experienced and spread that knowledge to similar communities throughout the Commerce footprint.

Today, Bowman is a board member for several community organizations and sits on the trustee board of her church. She’s particularly proud of the work she does with the Troost Avenue CID. “There are a lot of underserved people in this area, and the CID is trying to keep the community clean,” she says. “It’s a quiet and respectable place to live, and I’m proud to have managed the Commerce branch there.” 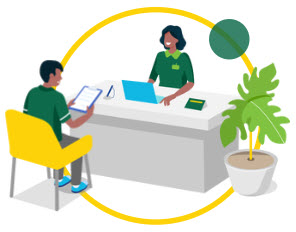 Sean Ackerson works with Bowman on the Southtown and Troost Avenue CID boards, and he appreciates what she contributes to both groups. “She’s very hands-on about doing the work,” he says. “She always wants to know what else she can do to help. She’ll ask if she’s helping enough and wants to know what else she can bring to the table. She never just sits back, waiting to be told what to do.”

Ditu Kasuyi, who has worked with Bowman on the UFSC for several years, has also been impressed with her. “When she was first elected president of the Kansas City chapter, I could tell that she was a little apprehensive about it,” he says. “From there, I saw a wonderful person come into her own and develop her own voice. She has a confidence about what she’s doing in the community.”

Kasuyi also appreciates Bowman’s ability to connect with people. “She’s built such great connections with community organizations and with individual people,” he says. “During the pandemic, sometimes people get a little discouraged or overwhelmed, but Jureau has this calm spirit and helps people find a way to move forward. She can connect with folks on that level.”

Ackerson believes Bowman’s ability to build relationships will serve her well as Commerce’s community outreach and banking officer. “She’s got a great approach,” he says. “When you sit down and talk with her, it’s a real conversation. She truly cares about the people in the community, and I think that makes her truly special to work with. She’s going to do great things.”